Housing shortage in the Netherlands rises to 263,000 dwellings 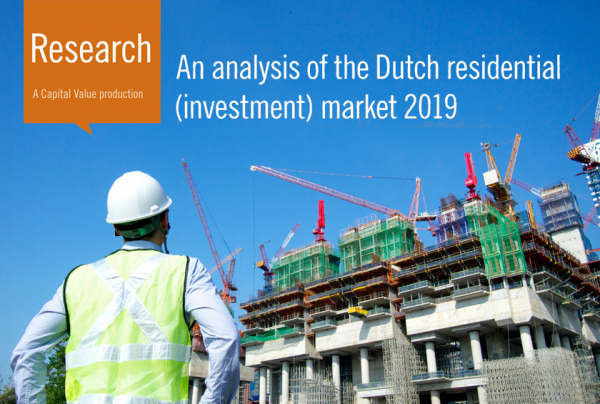 The housing shortage in the Netherlands is alarmingly high. Whereas last year it was still assumed that the shortage in 2021 would peak at approximately 235,000 dwellings, that shortage is now estimated at 263,000 at the start of 2019. That is 3.4% of the housing stock. On the basis of the current forecasts, a significant housing shortage must be taken into account until 2030. A lot of new dwellings are needed for senior citizens and starters in particular, and each region should pay close attention to the needs of these target groups. Investors have capital available in the coming years to realise 100,000 new rented homes. This is clear from the annual study conducted by Capital Value in cooperation with ABF Research.

Some 95,000-115,000 dwellings are needed annually
The growth of the population and the number of households in combination with the problems in the construction sector (increased costs, shortage of labour and materials, issuance of building permits too slow and shortage of locations) mean that the shortages are not decreasing, but actually increasing. Consequently, the housing shortage may continue to exceed 200,000 dwellings up to 2030. In order to curb the shortage, 100,000 to 200,000 more dwellings would have to be built in the coming years than is currently foreseen. That represents 20-40,000 more dwellings than the 75,000 that are currently planned for and illustrates the significance of the housing shortage. The regional differences are large. The pressure on the housing market is most visible in the metropolitan municipalities. Here, the housing shortage stood at almost 100,000 dwellings in early 2019 (6.8% of the housing stock). The top 5 of the COROP regions where the shortage is largest: Delft and Westland (7.4%), Greater Amsterdam (6.6%), Utrecht (5%), The Hague agglomeration (4.9%) and the Haarlem and Flevoland agglomeration (4.8%).

Starters and seniors most affected
The shortages are mainly hitting starters and senior citizens. The number of households over age 75 will grow explosively to 2030 by more than 373,000. The number of households with reduced mobility will grow by 115,000 over the next five years. There is therefore a need for more suitable housing for this group in particular. Regions with the highest growth of over-75 households are: Flevoland (99.7%), Kop van Noord-Holland (66.8%), Alkmaar and surrounding area (62.9%), Southwest Gelderland (59.3%) and Greater Amsterdam (58.9%). The number of young households (up to age 29) will primarily grow in the metropolitan municipalities (G5), by 7,800 households over the coming years. There are significant regional differences. If no homes are added to the stock, young households with a high income will find it particularly difficult to find an independent dwelling in the G5.

Housing associations face a major challenge
Housing associations play an important role in realising more rented homes, but seem unable to fulfil this role. Because they have now been assigned a big challenge in making Dutch rented homes more sustainable, they are facing a choice about how to distribute the 3.3 billion euros they make each year from letting their property – between making dwellings more sustainable and realising new-build output. Of the housing associations surveyed, 57% indicate that they do not have enough resources to finance the sustainability task. The new-build mandate housing associations are facing comprises approximately 120,000 units up to 2022. In 2018, they applied for a total of around 6,100 building permits. It therefore seems unlikely that this objective will be achieved.

According to Kees van Harten, Managing Director of Capital Value: "Many housing associations indicate that especially in urban areas, the lack of suitable locations and rising construction costs hinder achieving additional building plans.  To increase building output, municipalities could support associations by accelerating planning and lowering land prices. Furthermore, housing associations and investors should greatly increase their focus on cooperation to jointly build rented homes for both the social and mid-priced segments."

In 2018 more than 45,000 rented homes sold
Investors play an important role in reducing the shortages. In 2018, they invested a total of 8.5 billion euros in rented homes. This amounts to approximately 45,000 rented homes, an increase of 63% compared to 2017. With a share of 39%, rented homes have become the largest asset class in the Dutch property market in 2018. The Dutch pension funds were the main investors in the construction of new rented homes. The growth in the investment volume of care property was striking: from 700 million in 2017 to 945 million in 2018, a growth of 35%. The enormous growth of foreign capital (particularly pension funds) was also striking. In 2018, international investors invested more than 2 billion euros, a doubling from the previous year.

Record amount of over 20 billion euros available
Investors indicated that over the coming years they jointly have more than 20 billion euros available to invest in Dutch rented homes. This amounts to approximately 100,000 rented homes. The available capital for the coming years offers an enormous opportunity to work with the housing associations to reduce the shortages, if there is a greater supply of building plans and locations.

Stimulate building output
A higher building output not only affects the ability to make use of the available capital, but also the rising rent and purchase prices. In 2018, market parties and the government were unable to make progress on getting production off the ground. A number of recommendations emerge from the study and the National Housing Agenda, whereby the government and municipalities in particular (could) play a major role:

1. Accelerate long-term spatial planning procedures by expanding capacity and expert teams in the provinces
2. Avoid excessive rules concerning land allocation, and lower prices for housing associations
3. Accelerate construction sector innovation and prevent prices being driven up by too many links in the process
4. Encourage suppliers to expand capacity
5. Consider temporarily allowing additional employees from abroad
6. Ensure better regional cooperation and construction for the target group
7. Use available capital to increase the production of rented homes

According to Marijn Snijders, Managing Director of Capital Value: "Progress in the housing market can be stimulated by building more of the right type of dwellings on a regional basis and, in doing so, closely considering specific target groups, particularly seniors and starters – so-called demand-driven construction. This is particularly important because of the large differences in demographic development per region. Especially now, it is important to make use of the opportunities that are available. To this end, market parties and the government must cooperate even more intensively to create additional supply. If we don't make use of this, it will be a missed opportunity."

More information and the complete summary of the research can be found on the website of Capital Value.